When we first meet the character of C3PO he is in his complete golden form. He is worried, which is pretty much his mental state throughout all of the films, as the Empire is about to capture the Blockade Runner he is currently on. He says to his longtime companion R2-D2 about his fears “We’ll be sent to the spice mine of Kessel or smashed into who knows what!”. Considering that this does happen to him later on in the franchise it’s not a surprise that he feels this way. His first time as a creation dates back to the “first” film The Phantom Menace where he technically appears in the home of the Skywalkers. We are then asked to accept the very implausible revelation that Darth Vader built the protocol Droid. As they never share screen time again together it all seems a bit like a tacked on way to give him an origin story, one that he doesn’t  really need. 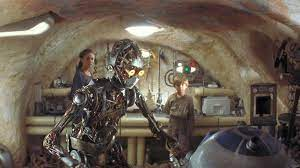 In this film he is in bits without his plated parts. You can see all of his innards. Anakin/Vader could seriously do with some Metal bonding adhesive from https://www.ct1.com/product-applications/metal-to-metal-adhesive/ to stick these bits on. It is evident that someone does by the time of a New Hope.

The second time C3PO is in need of the attention of some Metal bonding adhesive is in the Cloud City of Bespin. He has inadvertently discovered a squad of hidden Stormtroopers who do indeed blast him “into who knows what!”. It falls to the erstwhile Chewbacca to get the industrial strength glue gun and welding unit out to restore the poor droid to his former glory.