There is currently a lot of focus on our Members of Parliament at the moment. Outside the House of Commons is the Members lobby. MPs wait outside before they enter the House and discuss, and they have much to discuss at the moment, the business of the day and the country in general.  In the lobby stand four past Prime Ministers of the main parties cast out of solid bronze looking in judgement at the assembled members. Bronze is the perfect medium for sculpture, especially when you pair this with a concrete plinth for the statue to stand on. A Kent Ready Mix Concrete The main ones in the Lobby are the two former Conservative PM’s, the war leader Winston Churchill and the first female PM Margaret Thatcher.  For Labour there is Clement Attlee the great post war leader who saw in the NHS and the Welfare system and for the Liberals there is David Lloyd-George. Each one, with the exception of Thatcher has a shiny foot where the brass has been rubbed for luck by MP’s. Due to the damage done by this the practice is banned, which is a shame as most MPs could use some of it right now. 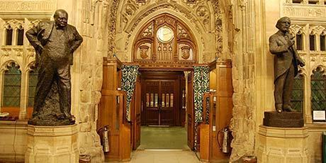 The Houses of Parliament is well worth a visit and tour.

« Life in the Cotswolds
Things you never knew about flies! »